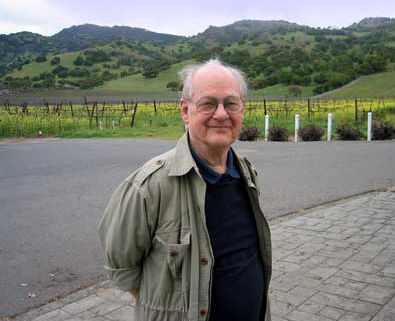 The first time Bob Miller picked up a paint brush was to do a landscape on the side of an old wooden peach crate he found behind his father's barn. Growing up on his dad's peach farm in the 1930s east of Modesto, California, he has painted and drawn ever since.

He has exhibited widely in Northern California in both galleries and art fairs including the California State Fair. Bob painted a mural of Sacramento pioneers on the promenade connecting Old Sacramento to the K Street Mall. His whimsical drawings of "Wind-in-the-Willows" characters are a permanent part of the River Walk on the east side of the Sacramento River, south of the historic Tower bridge.

Bob has served on the boards of the Crocker Art Museum, the Sacramento Discovery Museum, and was a founding member and president of the Art Directors and Artists Club of Sacramento. He is currently on the Fred Wade Scholarship Committee of the Sacramento Ad Club. In 1990, Bob was selected Sacramento's Ad Man of the Year.

Bob works in both watercolor and acrylic and many of his paintings are plein air, but he frequently works from photographs, both old and new, from his studio where he lives and works in Sacramento California.